Netflix Q4 2019 Results were published recently and some industry observers suggest Netflix has reason to be greatly concerned about their performance in 2020. I’m not convinced their observations are on the money. Analysis is not ALL about numbers. Very often analysis is about the intrinsic and intangible, but increasingly it will be about the creative.

As a technology and subscription entertainment business undergoing global expansion, evaluation of Netflix merits different performance criteria from different regions and metrics. To measure in subscription numbers alone when variables such as time in market, economic conditions, market profile and competitive forces are considered, is to risk ignoring some significant strategic competitive advantages in their favour, the value of which are yet to be seriously recognised.

The Netflix Advantage: Netflix essentially pioneered today’s direct-to-consumer streaming model and is now a dominant force in what is arguably the most dynamic commercial and creative marketplace globally. Netflix continues to compete on its own terms, moving fast to capitalise on it’s first to market advantage in international territories with original content.

Perhaps their greatest asset is their willingness and ability to innovate, to make bold decisions that break with convention to forge their own path. Having done this historically, Netflix is now in a position of privilege in the streaming video OTT/CTV/SVOD world having:

How Netflix makes full use of these assets will be the more influential factors affecting their performance in 2020, but for those who like to crunch numbers, here’s a few numbers with contextual overlay.

Netflix Comparative US Market Insights: The company reported revenues of $5.47 billion which beat analysts expected revenues of $5.45 billion. Revenues also continued to show healthy growth of 30.6% year over year, which was impressive given increased competition.

In Q4 2019 Netflix reported they gained 8.8 million new subscribers, which is actually in excess of the 7.6 million they had previously forecast. To put this result in context, Disney+ launched in the US, Canada and Netherlands in 2019 at a heavily discounted (and likely unsustainable or unprofitable) introduction price of US$6.99 p/month or US$69.99 p/year, to entice subscribers to try their offer.

As at February 4, 2020 Disney had 28 million subscribers globally, so Netflix adding almost nine million subscribers in the last quarter of 2019 is a comparatively strong result. Even though they only gained 420,000 of the 600,000 subs they forecast they would gain from the UCAN (US & Canada) region, bearing in mind the “modest headwind” they anticipated in their Q3 forecast, recognising Apple TV and Disney+ launches in 2019, the market appeal of Netflix is undeniable.

Amazon Prime may have in excess of an estimated 150 million Amazon Prime subscribers globally, but only around 50 million of those are Amazon Prime Video subscribers, all of whom do however enjoy high quality streaming of up to three titles at a time, on up to two devices, extending the potential value of the subscription across friends or family members. Amazon is using sport to boost their international subscriptions eg. Adding live streaming Premiere League Matches in the UK. But Amazon’s streaming content motivations are distinctly different to most of their streaming video competitors. Amazon’s direct-to-consumer relationship is predominantly driven by retail consumption benefits, which is not the same priority as a content consumption intent.

Maintaining the purely US perspective that most market commentary is centered on, there’s Hulu, Roku, DIRECTTV, Pluto and others (all currently US only based), each with around 20-30 million subscribers on a variety of SVOD, AVOD and FAST packages. If Netflix can continue to add each month, one third to a quarter of the total number of subscribers their US competitors have, the company’s performance will continue to be statistically, operationally and financially superior.

Netflix International Market Position: Netflix embarked on their global expansion in 2016 in full knowledge and anticipation of the competitive landscape that has been brewing in the US. As a public company, Netflix must be transparent, but it’s under no obligation to herald its every thought on how to approach the market in the face of emerging competition.

Their UCAN numbers might have the slowest growth in subscriber addition since 2011, but this region has been established the longest and with 67.7 million subscribers, is the largest representing 40% of Netflix subscribers. It also delivers the highest ARPU (Average Return Per Unit) of $13.22, which is considerably higher than all other regions.

The second biggest region EuMEA, has grown really fast adding 14 million paying customers over 2019 for a total of 51.8 million subscribers. The region has the second highest ARPU at $10.51 cents, and the population and average economic conditions could see the region become one of their most important.

Compare this to Latin America which launched early (2011) and is still seeing growth of paying customers increasing by 5.3 million to 31.4 million total subs. It’s a slow burn in this zone, but regional consumer economics has constrained price increases, the service price has only increased by 30 cents in three years to $8.18.

AsiaPac is also growing fast with 53% YOY growth for Q4 2019 with 16.2 million subscribers, but here too there are challenges local to the specific territories. Responding to consumer price tolerances and mobile prevalence in content consumption, Netflix introduced a low cost mobile only plan to India, Indonesia and Malaysia. This effected ARPU falling to $9.07 in 2019. The region has the largest population density, but is the most recently launched, so it has the smallest number of subscribers and a low ARPU, reflecting the economics of some of the highly populated territories in this region. Over time, lower ARPU can be offset by high volume of people becoming subs on emerging low cost mobile plans.

Average revenue per unit in Asia is a concern, but the low cost plan was essential to compete with local competition from iFlix and Hotstar. APAC will ultimately contribute to Netflix’s bottom line, but 2020 will be a far more modest year of performance from this region.

The biggest nod to where Netflix is planning to court growth is in the new content they’re currently producing in 25 countries, with 133 titles originating outside of North America, including its first African title. It is heavily focused on specific markets.

Price Tolerance, Subscriber Attrition & Content Quality: Competitive forces, local market content consumption preferences and regional price tolerances make it difficult for Netflix to raise prices. Some attrition is likely due to consumers testing other services, but no lock in contracts make it easy for subscribers to move from one to another service to binge on new shows and revert to their favoured streamer afterwards – a consumer practice termed ‘spinning’.

That Netflix is not immune to competitive forces is evident in the quarterly YOY growth rate in Q4 2019 being lower than in Q4 2018, with deceleration obvious in all regions. The ‘Disney+ effect’ will begin to encroach on growth in Europe, as it rolls out in that region later this year and the UCAN zone will face more headwinds with the impending introduction of HBO Max and Peacock from NBCUniversal launching a US$5 p/month package with ads.

Netflix will experience further deceleration in subs in UCAN going forward. The with growth in subscribers will come from the other LATAM, APAC and UAMEA regions, which will contribute new subscribers from the existing potential market AND from the market growth resulting in more people having access to quality internet connection in those regions.

I predict revenue growth will slow in response to competitive forces most active in UCAN, but as viewers sample what’s on offer and the inevitable consolidation of market participants occurs, they will eventually settle for a select range of content sources. 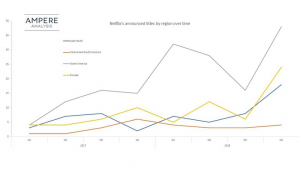 Netflix original content is respected and rewarded – in Q4 2019 the Irishman was the most talked about movie of 2019 in movie business, but can Netflix keep up production with demand to warrant the monthly fee? Disney is new and family focused, but how much of their content can sate all the family needs. While prices remain the competitive focus, it’s likely most family households will opt to have both.

Netflix is in a position to expand their content stable into other genres such as sport and news, in a tactic that could bolster their value proposition and dilute competitors strengths. Their technical capabilities and global consumer connections give them a considerable competitive advantage when negotiating rights to high profile sporting events – Kentucky Derby, America’s Cup, Melbourne Cup anyone?

What About Advertisers: The participation of advertisers in the future of Netflix has not been disclosed or presented in any measurable way from Netflix, but why would they divulge and broadcast their competitive stance to the market at large? There’s nothing stopping Netflix participating with advertisers in their own way and in their own time, remembering that Netflix has evolved to be half a digital business and half a subscription entertainment and content business.

When you’re a public company whose performance is under constant analysis and market surveillance, it’s prudent to reveal only what you need to, to meet compliance requirements while realistically and honestly delivering encouraging information about your prospects to the marketplace.

The addition of an ad supported, low cost plan is always an option for Netflix, but they can offer far more innovative alternatives to advertisers given their established distribution and technical interface to consumers, their consumer behaviour data and their creative and production talent resources.

2020 And Beyond for Netflix: We can expect Netflix will be in that mix for sure and they may even recoup some of the subscriber attrition. But if their signature boldness is also to be expected, we can also expect to see Netflix at the table:

So on deeper evaluation of all things considered in Netflix’s arsenal, I think their strengths outweigh their weaknesses and as the saying goes “it’s their attitude that will determine their altitude”.

If you would like to know more about the streaming video market opportunities in Australia or internationally, contact Wanted Consulting – Reward Offered.