Get To Know You? There’s An App For That!

Finally, a social network app that removes the need to uncover those pesky personal details about someone nearby through conversation! Octi is a social network launched this week in the US by Justin Fuisz, that’s supposedly premised on encouraging users to interact IRL (in real life) – using an app on their phones…

Clearly an idea of it’s time, instead of actually verbally and kinetically interacting with the people in your vicinity, Octi users simply point their smart phone in the direction of the person they’re curious about. If they accept their request to friend, they can discover a person’s basics without the need for conversation that might actually uncover a person IRL, and without the unwanted addition of the individual’s discretionary emotional colouring such as enthusiasm, qualification or raison d’être for their choices.

Why should you actually talk to someone to discover who they are when you can just scan them?

Apparently established social media platforms encourage people to live online rather than in person ie. Being in the presence of people, but engaging with others online, and at some point this is seen as a negative trait in terms of socialising. But where Facebook, twitter, Insta, Snap Chat, TikTok et al are generally used to broadcast to or interact with an external online audience, Octi negates the need to open up an actual conversation with a person ‘in person’ to ask about a person’s interests, likes or dislikes, because you just ‘scan’ them! 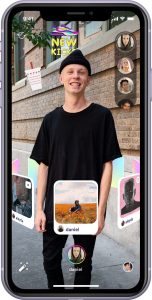 Octi uses facial recognition to identify and add friends (and perhaps strangers) near you, when users make friend requests and pull up profiles. Using camera to camera to ‘scan’ the person nearby to uncover their virtual belt (using AR) of interests, likes, dislikes, commentary, photos, YouTube videos, songs streamed on Spotify etc., negating the need to actually open a conversation with them to ask about such things.

There’s elements of TikTok in there where you can send sparkles, hearts, stickers, GIFs etc., if they like the physical and online profile of the person before them, and a little more interactivity with the ability to change their profile or add a nominated theme song to it for the day.

The app is premised on engineering interaction with people IRL nearby. So now instead of having to actually engage with a person nearby (imagine on the bus, at a theatre, in a cafe or even a queue), you can just scan their profile and make a judgement call about whether you want to actually engage with them or not. I guess if you think their interests reflect your own or you just decide you like the look of them anyway even if they don’t, you might decide to actually ‘socialise’ with them in the real world? Conversely you might decide you don’t like them after viewing their profile. There’s a whole fresh way of being rejected.

“I want people to use it when they’re together, sitting on that couch or wherever, and they would typically ignore each other and take out Instagram,” Fuisz, Octi’s CEO, told CNN Business. “I want them to use it to connect, to communicate, express culture, share music, brands — all this fun stuff that people are already doing in other ways, but I want them to do it in the real world, when they’re together.”

He just wants them to do it on his app…

Is it just me or is there some gigantic irony being missed here? Octi users find themselves in the same vicinity and the goal is to get them to lift their head from the screen to get to know each other better, and yet the app itself requires they ‘point and shoot’ to get a full dump of information on that individual and make a judgement on their appeal. All that process of discovery, element of mystery, the look across the room saying ‘You look like someone I might like to get to know’ – navigated through a precursory review of the social profile. Wow! Don’t get that wrong or you’re dumped – no pressure!

And so much for moving through the world with some semblance of anonymity:
“In theory, a user could point the app at a stranger in a public place, if they are close enough, and request to add them, as long as they’re on the platform.
In that case, the company said, the stranger’s profile photo and username would appear. It’s not hard to imagine a scenario where a user could point their phone at a stranger in a coffee shop and pull up their username, which could be similar to their actual name or appear on other accounts online linked to their real name.
Octi said users can make their profile photo and username whatever they want, so it doesn’t necessarily have to provide any information about their identity.” CNN


Using AR in social media is a natural progression, but for me this app raises a bunch of potential security concerns that the founders perhaps didn’t envisage when they conceived the platform, such as the ability for the unscrupulous to pair the user name and images and crosscheck with other information online for less positive motivations. But that’s another story.

Perhaps in a world where time is an ever decreasing resource, an app that removes the need for conversational small talk, the banter and chat that allow people to test and sample personality, read their energy and gauge their individual intellect – is more valuable than the initial five-ten minutes of personal interaction?

It seems to me that Octi is a fabulous example of how the more technology allows us to connect in new ways, the more disconnected our society becomes. Fast food, speed dating and now speed rating through an app that suggests you can uncover and evaluate the humanity of an individual, simply through a range of social media profile categories, when actually talking to the person before you could lead to a date or a lifetime of further discovery of their unique being.